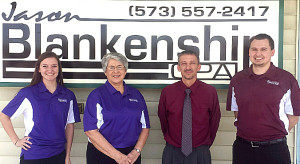 Jason, owner and founder, was born and raised on a small family farm near High Point, Missouri.  After graduation from Eldon High School, he then continued his education by attending and graduating from Lincoln University with a Bachelor’s degree in Agri Business and a minor in Business Administration.  After spending time in the fields of insurance and information technology, Jason started in the accounting field in 2004.  In 2005 he took additional accounting classes allowing him to set for and pass the CPA Exam.  Before opening his own firm, Jason spent 8 years with Bobby Medlin, CPA and 3 years with Evers & Company, CPA’s LLC the two leading CPA firms in the Central Missouri area.  Jason is married to his beautiful wife Tricia and has 3 children that attend school at Eldon R-I.  His family also attends and are active members of Ninth Street Christian Church in Eldon.  In his spare time Jason enjoys watching sports of any kind, playing golf, and spending time with his family.

Anthony was born and raised in High Point, Missouri.  He is a graduate of Eldon High School and earned a Bachelor’s degree in Accounting from the University of Central Missouri in Warrensburg.  After the completion of his degree in 2011, Anthony began working in the accounting field with Chris Hermann, CPA of Osage Beach for 3 years and then worked for Evers & Company, CPAs in California for one year.  Anthony is married to his lovely wife Heather since 2011, and is a member of Eldon First Baptist Church.  In his spare time, Anthony enjoys playing sports such as baseball and basketball.

Misty joined the team in November of 2016 and previously worked with Jason at a CPA Firm.  She has 10 years administrative experience.  In her former roles, Misty had leadership responsibilities for business operations including human resources, internal finance, administration and technology.  She is originally from Silverton Oregon but was raised and graduated in Eldon.  Married to Steven and has 2 kids that attend Eldon R-1. In her spare time, she loves to watch her son play football, daughter cheer, and spending time with her family.

Martha was raised on a turkey farm in Rocky Mount, Missouri.  After graduation from School of the Osage in Lake Ozark, Missouri, she worked for the State of Missouri as a Revenue Agent in Kansas City, Missouri.  It was in Kansas City where she continued her education by attending and graduating from University of Missouri, KC with a Bachelor’s degree in Accounting.  After graduating, she returned home to be with family and work in her field of education.  It was during this time she worked with Jason for several years at a local CPA firm.  Martha is married to her wonderful husband Rick and are members of Blue Springs Baptist Church in Rocky Mount.  In her spare time, she loves to host gatherings for friends and family.